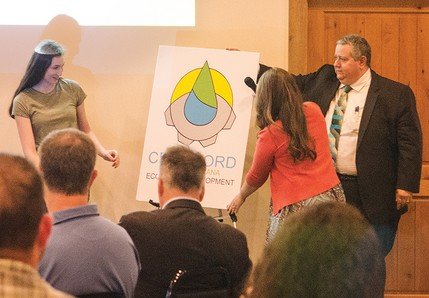 Last Thursday’s inaugural dinner meeting of the Crawford County Economic Development Partnership was a time to celebrate the accomplishments of the past year, as well as to look forward to what officials believe is a bright future, which was illustrated by the unveiling of a new logo and website. 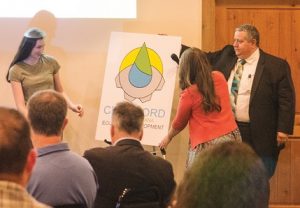 Crystal Buehler of Buehler Designs, who is developing the updated selectcrawfordcounty.com website, digitized Mousty’s design. Telling those gathered at the Patoka Lake Winery event center about the importance of marketing a cohesive message about what Crawford County offers economically, both to those in the county as well as to those outside, Buehler praised Mousty’s vision.

Buehler’s updated website, which is still in development, incorporates the same colors as Mousty’s logo and features a cleaner design than the former website.

The evening’s keynote speaker, Becky Skillman, who served as lieutenant governor from 2005 to 2013 and then director of Radius Indiana, currently serving as chair of its board, talked about the need for the region to work together to foster economic development.

“The goal of our regional organization is to ignite prosperity in the heart of Southern Indiana, and our mission is to lead regional collaboration,” she said.

“You have great assets here,” she said, pointing to Patoka Lake and the industrial park at Leavenworth, as well as the county’s close proximity to Louisville, its base of small businesses and its scenic beauty.

“So, Radius wants to help you seize the day, seize your opportunities,” she said.

To help, Skillman, along with Radius Indiana President and CEO Jeff Quyle, presented a $150,000 check to expand and complete the sewer line extension at the industrial park. 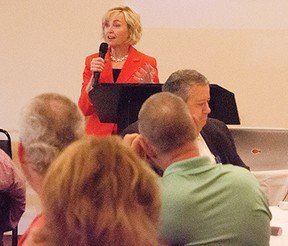 Calling Skillman a “dear friend” from his time as director of community affairs for the Indiana Office of Community and Rural Affairs, which Skillman started and oversaw while she was lieutenant governor, Thissen presented his former boss with a bottle of wine from the host venue.

Thissen, who noted that he learned much about leadership from his former boss, saying his five years with the state were “life-changing,” said it will take a team of people to move Crawford County forward economically. Hired as the county’s economic development director in March 2018, he said he has been pleased with officials’ willingness to work together.

Thissen pointed to all three county commissioners and all seven county council members earlier this month signing a letter in support of a private-public partnership that would bring broadband internet to 70 to 80 percent of the county’s population.

“The idea is that we are together,” he said. “It’s the idea of being together like that to say that this is a commitment that we must make.”

That isn’t the only success story of the past year, Thissen said. He pointed to several public meetings where the community has had the opportunity to voice its thoughts regarding quality of place, the upgrading of the industrial park to a standard where it can now be marketed, and bringing resources, such as the Small Business Development Center, to the county, instead of residents having to go elsewhere for those services.

Thissen also talked about successes in collaboration — looking for commonalities with partners, creating a quality of place and workforce attraction plan and co-sponsoring events — as well as building a successful future.

“The most important picture in this presentation is there right now,” he said, pointing to a girl on a bicycle. “We’re working for them.”

Thissen noted that the industrial park this past year got a second tenant, the first in 20 years. He said SIMCO of Southern Indiana is expected to have 10 jobs by the end of 2019 and perhaps double that by the end of next year.

While the county has several strengths, including diverse industries, regional partnerships and unique natural assets, Thissen said it still faces several challenges, such as commuting patterns, workforce training and talent retention, the unknowns are less than what they were a year ago, giving him reason to be “optimistic” about the county’s future.

However, that means being willing to tackle things like the need for broadband internet, housing, international investment, modern branding and marketing, Thissen said.

Sharing a favorite quote of his from Skillman, Thissen said, “Leadership is about action.” That means getting involved, whether it be sitting on a committee or utilizing available resources, he said, explaining his door is always open, whether it be to potential businesses or residents needing help with crafting a resumé in order to get a job.

“From day one, I’ve been very, very steadfast about this,” he said.

Thissen closed his portion of the program with some positive numbers. While the county’s population has dipped slightly, its labor force (the number of residents who have a job, whether in or out of the county) has increased substantially, from 4,620 a year ago to 5,009, decreasing the unemployment rate from 6.3 percent to 4.5 percent.